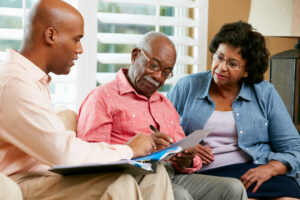 If you are the surviving spouse and named as a beneficiary, then the account funds do not have to endure the probate process. You are responsible for claiming the money directly from the company that holds the account. But even if you were not named as the beneficiary, you may still have the right to claim some of the funds.

Rules for Beneficiaries on Retirement Accounts

A beneficiary can withdraw money from a retirement account immediately, but may have to pay income tax on it the year in which it is taken out. Depending on the account, these are the primary factors on which a beneficiary’s options are dependent:

The surviving spouse is not automatically entitled to inherit the money in a traditional IRA or Roth IRA. The named beneficiary (if there is one designated) will be the person able to claim the money. There are, however, certain limitations on this right.

A surviving spouse is always guaranteed some sort of asset from the deceased person’s estate. Surviving spouses who are not satisfied with what they inherit can go to court and claim the share of property allotted to them by state law. The amount varies widely from state to state, and in some places it depends on the couple’s length of marriage. The law may take IRA funds into account when determining how much the survivor is able to claim.

401(k) and Other Qualified Plans

The surviving spouse has the right to inherit all the money in the account unless they forfeit their rights by signing a waiver and thereby allowing the deceased spouse to name a different beneficiary. The waiver form is usually provided by the institution administering the qualified plan and signed at the time the employee enrolls for the retirement plan. The waiver is valid only if it was signed by the surviving spouse while the couple was married.

For further guidance about your legal right as a surviving spouse to inherit retirement accounts, please contact the Law Office of Inna Fershteyn at (718) 333–2394 to best assist with your will, trust, and estate inquiries.