Inna Fershteyn, Esq. has received many prestigious industry awards in addition to her status as the most highly rated and recommended estate planning and medicaid fraud  attorney in the New York area. 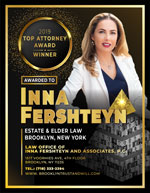 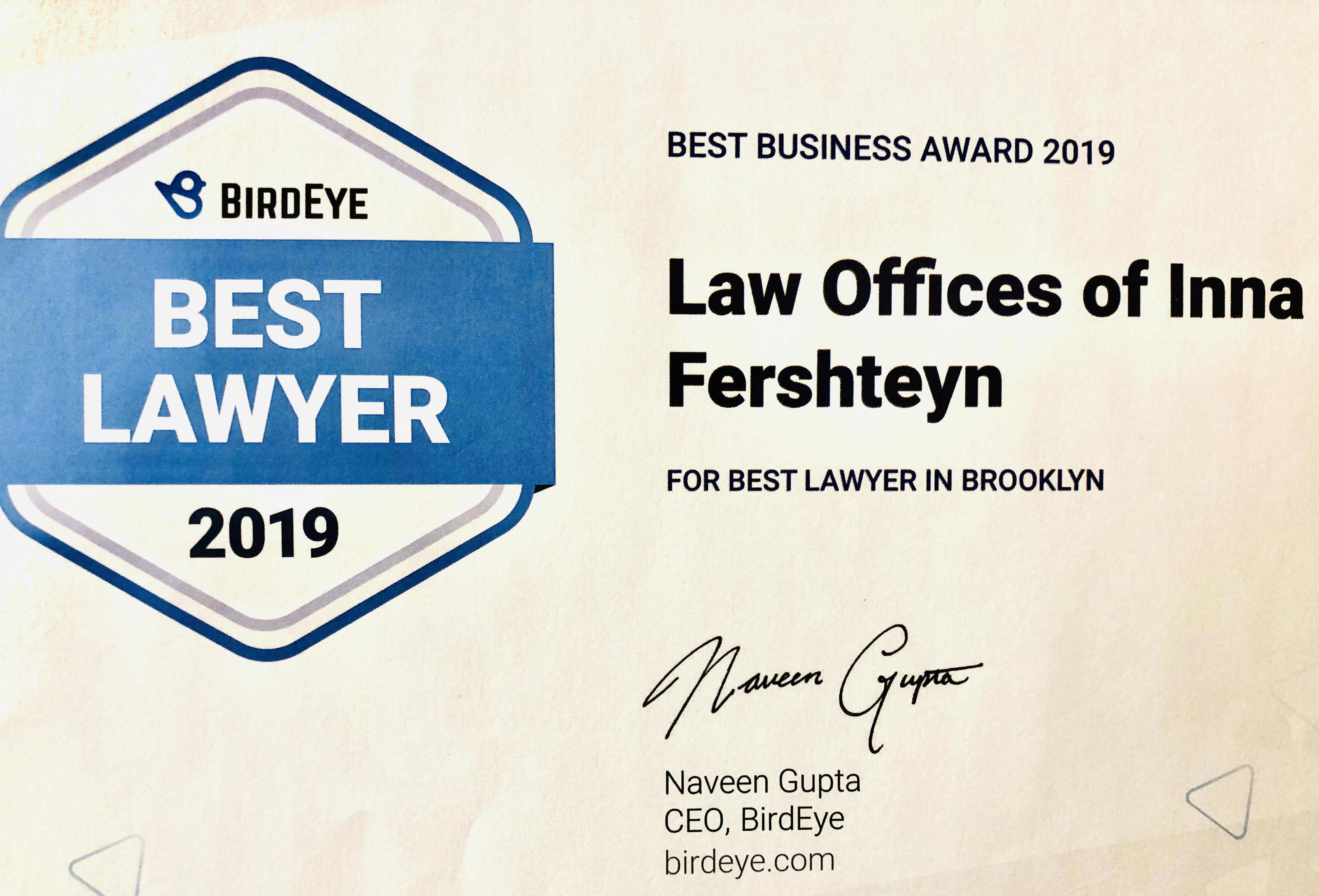 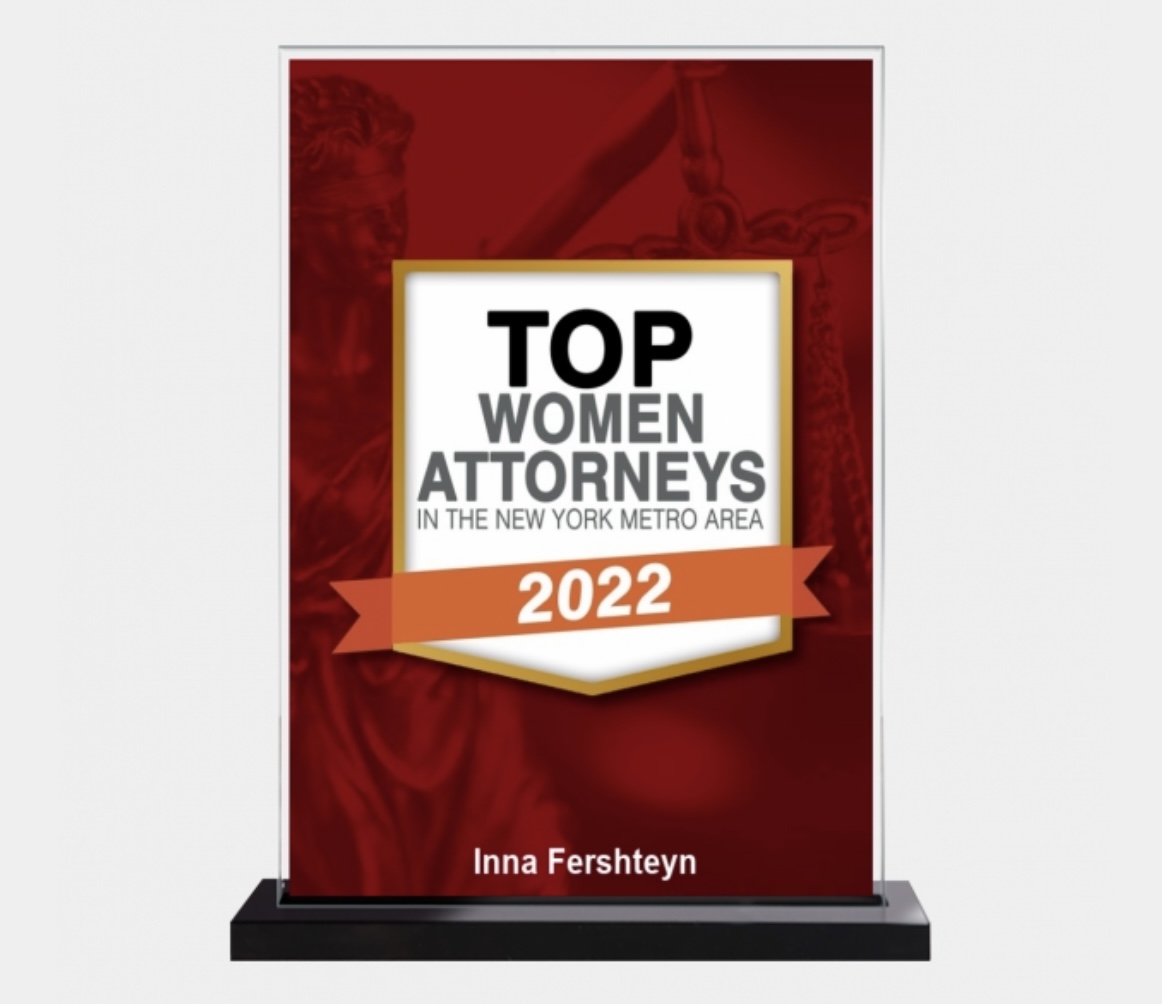 Following graduation she practiced law in Corporate Finance department of Bryan Cave, LLP where she counseled and structured transactions for large multi-national and publicly traded corporations and later at Heller Ehrman White and McAuliffe, LLP where she served as head of the Associate Committee and joined the Trust & Estates department.  After practicing for those prestigious law firms, Ms. Fershteyn decided to venture out on her own and founded the Law Offices of Inna Fershteyn and Associates, P.C. where her law practice focuses on Wills & Trusts, NY Estate Planning, Asset Protection, Business Continuation Planning and Elder Law, and her clients range from individuals and entrepreneurs to privately held companies and large estates.

A New York State Certified Mediator, Ms. Fershteyn has more than 600 hours of negotiating and mediating business and commercial disputes. A top Russian speaking lawyer in New York, Ms. Fershteyn is both  fluent in Russian and Ukrainian. She has represented numerous United States companies and investors in their business dealings in the former Soviet Union, as well as Russian companies in their business dealings in the United States.

Despite her busy law practice, Ms. Fershteyn is involved in the community. She helped to establish the Menachem Educational Foundation, an organization that ensures that every Jewish child has access to the best education. She organizes many charitable events including Chanukah at the Brownstone through Russian Jewish Family Club, an event which was attended by over 150 people. She also served on the Board of Directors of Carl Marks Jewish Community House (JCH) of Bensonhurst from 2011-2013.

Ms. Fershteyn also served as a volunteer for NYU Langone Pediatric Services Family Advisory Board at Sala Institute for Child and Family Centered Care from 2013-2016 and in 2016, she has been appointed a Senior Family Advisor in a management capacity of the SALA Institute. She devotes a lot of her free time working with children with disabilities and helping them and their families with legal and financial planning for their future.

Ms. Fershteyn is also a President of the New York Association of Russian-Speaking Women Attorneys, and is a Member of the Leadership and Safety Committee of the Edward R. Murrow High school.

Ms. Fershteyn’s community awards and honors include the Eleanor Roosevelt Distinguished Service Award from the United Progressive Democratic Club; Certificate of Special Congressional Recognition for “outstanding and invaluable service to the community”; New York State Senate Legislative Resolution No. 1790 of 2009 in honor of Ms. Fershteyn; and a Citation from the Brooklyn Borough President.

Ms. Fershteyn has begun working pro bono to establish a trust for 2 orphaned girls, two orphan sisters who have tragically lost both of their parents in the span of two years.

I forgot to report a change in my income to Medicaid, what do I do? Will I be penalized?

If your failing to report an adjustment to your income was unintentional, it’s unlikely that you will face any major penalties as long as the income doesn’t exceed the maximum for Medicaid eligibility. That being said, if the Medicaid office discovers that you failed to report an adjustment to your income that places you in an uneligible income bracket for Medicaid, odds are that the HRA will launch an investigation into your eligibility and will send you a letter notifying you of their doing so. The sooner you report your new income to Medicaid, the sooner you can sleep soundly at night.

Will my investigator negotiate a settlement?

Depending on the nature of the investigation your attorney may be able to negotiate a settlement with the investigator in order to avoid a court appearance or further criminal prosecution. If that is the case, you’ll usually have the option to pay off the balance either via a lump sum payment or monthly installments.

Who Is Investigating Me?

The Medicaid Office employs professionals that are trained to conduct a thorough investigation. They have access to a team of data analysts, financial auditors and medical experts to retrieve any information that they can legally attain to use against you.

Connect with Inna Fershteyn on LinkedIn.