A revocation of the Power of Attorney is a legal document which confirms that you, the principal, no longer want the agent, the person who was named power, to act on your behalf. While having a Power of Attorney is certainly a vital part of any estate plan, it is quite common for individuals to change their mind about who they authorize to handle their financial and medical responsibilities. In the case you do happen to change your mind, you can revoke the Power of Attorney as long as you are still capable of making rational decisions and communicating them effectively. 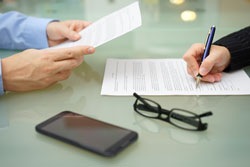 Why Revoke the Power of Attorney?

There are several instances in which an individual, legally referred to as the principle, may change their mind about the person to whom they’ve delegated the Power of Attorney, or the agent. One instance involves the agent being unable to fulfill their legal duties due to a lack of capacity, or even a loss of interest in bearing the responsibilities. Other reasons for revoking the POA may include the Principal believing that the Agent is not completing the requirements appropriately, the Power of Attorney no longer being desired, the Principal wanting to change Agents or if the responsibilities of the Agent have already been completed.

The principal is the only person with the legal right to terminate a Power of Attorney designation. If the family feels that the agent is abusing their powers, they will have to involve the local family court to terminate the agent’s powers.

How To Revoke the Power of Attorney

Consult With A Professional

Revocation of Power of Attorney is usually not a complicated process and can be executed fairly quickly with the help of a professional. If you or a loved one are looking to revoke a current agent to whom you’ve delegated the Power of Attorney, consult with an experienced estate planning lawyer in New York who can guide you through a seamless transition.

As soon as Inna called me back ( after an email inquiry) on the phone I knew she was the attorney for me!
She gives an immediate call back after an inquiry. Her staff is involved and all hands are on deck. Not only a professional and friendly office , you feel welcome and an instant connection.
Inna has all the answers to your questions for wills, estate etc.
Best decision I made was going to Inna . The process is fast , convenient and affordable . She is honest honest honest !

Inna is an amazing lawyer she did a great job putting together will and power of attorney for us. All was done in one day time! Best elder law attorney in Brooklyn !