One of the earliest examples of asset protection, or the assurance that one’s assets are protected from creditor claims in the event that they are sued, is found in one of the most worshipped documents in the world: the Bible. While people are generally familiar with the scenario of Noah’s Ark, its relevance to the need for asset protection is frequently overlooked. 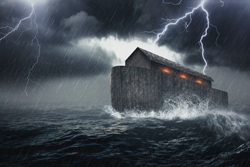 As the story tells, before a massive flood hit the earth, Noah spent almost a century building an enormous Ark, or boat, to safely carry his family, as well as two of every species of animal, until it was safe to set foot on land again. Without Noah’s foresight of the flood, he would have had no incentive to build the boat, and would not have been able to rescue as many animals as he did nor save himself. By acting as he did, he protected the most valuable asset in his care – humanity’s future.

Regarding modern asset protection, while most people generally don’t have true foresight regarding tragedies that may occur in the future, with the help of an asset protection attorney, there are preemptive measures they could take to ensure the protection of their assets from creditors’ claims, if ever the time should come that they are found liable. In short, although people no longer have to worry about massive floods on a global scale, they do have to worry about getting sued.

A building is owned by a Limited Liability Company (LLC), and the LLC doesn’t have liability insurance. One day someone falls down a staircase that has needed renovation for a few months. Within a few days, the injured individual sues. Since the company was never insured, the LLC Manager is sued personally.

The LLC Wasn’t Insured, Bad News for the Manager

One of the perks of owning an LLC is the possibility that if the company is on the receiving end of aggressive litigious action, employees of the company cannot get sued personally. Instead, the company is sued as a single entity, making it much harder for the company to be found liable. In this case, since the LLC manager neglected to acquire liability insurance, he is at risk of losing many of his assets to creditors (the fallen pedestrian who perhaps has a broken leg).

Think Ahead – How The Manager Could Have Saved His Assets

Aside from purchasing liability insurance, the LLC manager’s problem could have been avoided with proper estate planning. Prior to the incident, or even when the LLC was first opened, the manager could have opened an irrevocable trust to store his assets. An irrevocable trust is a safe way to remove certain assets from your personal ownership and gift them to a beneficiary without granting any possible creditors access to those assets. An irrevocable trust, by definition, cannot be amended, so once assets are moved into one, creditors looking to hold a judgement against the manager and gain the assets will do so to no avail. In addition, the assets are also protected from the beneficiary’s liabilities as long as they do not have a defined interest in the assets contained in the trust, via a spendthrift provision, which limits the beneficiary’s access to the assets while completely revoking that of any creditor. Had the manager put his assets in an irrevocable trust prior to the incident, they would have no longer been under his ownership, and creditors would be out of luck when trying to access them.

Besides storing your assets in an irrevocable trust, there are ways to protect your estate from creditors.

A young doctor is driving a car and gets into a fatal car accident. Though his car is insured, he soon finds out that there is not enough coverage on the insurance to compensate for the tragic accident. Later, he finds out that the family of the deceased person is suing.

Insurance Wasn’t Enough – The Young Doctor Could Lose His Assets

In this situation, since the doctor’s insurance does not fully cover the charges over which the family is suing, he is at risk of losing any assets he may have incurred over his hard-worked career.

A Retirement Account Could Save Your Assets Before You Retire

Besides driving carefully, prior to the incident the doctor should have opened an Individual Retirement Account (IRA) or Roth IRA. Over the last several decades, IRA’s have become one of Americans’ most valuable assets, and for good reason; a traditional IRA allows for contributions to be deducted from federal or state taxes and a Roth IRA does not tax portfolio earnings. Aside from potential growth in the principal amount contributed to an IRA through a mutual fund or other type of investment, while federal law does not provide an exemption, the law in most states including New York, New Jersey, New Hampshire, Florida, Michigan, Indiana and other states calls for the exemption of IRA’s from creditors. In the case of the young doctor, had he stored his assets in a retirement account, as long as he was in a state that permitted this exemption, the family of the deceased person would not have been able to access them through litigation.

The reality is, asset protection is much like insurance. You buy car insurance to protect your car in case you get in an accident. You purchase health insurance so you can receive healthcare for free or for an affordable cost should you ever need it. You buy flood insurance in case your home is ever adversely affected by a massive flood. What all of these examples have in common is that insurance is acquired before disaster strikes (Remember that Noah built the ark before the flood hit). Asset protection, similarly, is something that should be acquired before the situation which requires it arises. As it relates to the scenarios outlined above, with the help of a licensed asset protection attorney, you can make sure that your assets are kept safe from any legal action of which you are on the receiving end.