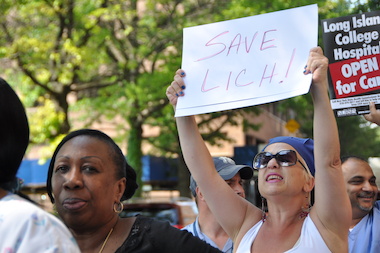 The company selected to run the proposed new Long Island College
Hospital paid nearly $100 million in fines to the feds to settle
accusations it systematically defrauded the U.S. health care system for
nearly 15 years, DNAinfo New York has learned.
The U.S. Justice Department alleged that Quorum Health kept two sets
of books on its Medicare costs from 1985 to 1999 — one of which
contained inflated, reimbursable medical costs, which it presented to
the government for payment. And in a separate case, Quorum was accused
of wrongdoing at an Alabama Hospital involving misallocated costs to
inflate government payouts.
In April 2001, the company — one of the largest health care providers
in the country — forked over $95.5 million to settle the two lawsuits.
Quorum Health recently surfaced as part of a newly formed consortium
called Brooklyn Health Partners, which won the statewide bid to reopen
LICH. It beat out eight other bidders
to take over the troubled Cobble Hill facility, offering $250 million
and a community-pleasing pledge to operate a 300- to 400-bed hospital at
the site.
Brooklyn Health was cobbled together by California hospital provider
Merrell Schexnydre, who reported that Quorum management would run the
hospital.
But federal records show Quorum Health, a Tennessee firm that
operates about 200 hospitals around the country, came under Justice
Department scrutiny after a whistle-blower alleged the company was
cooking its books and falsely receiving millions of dollars in Medicare
reimbursement.
In announcing the Medicare fraud settlement in April 2001,
the Justice Department declared “the civil settlement resolves
allegations that (Quorum) made false statements in annual cost reports
to various fiscal intermediaries, the companies that process Medicare
cost reports for the government.”
The company also has several other recent lawsuits involving
bankruptcy or negligence cases, including a federal suit filed in
February in Mississippi in which a hospital claims Quorum’s management
was “so abysmal that the hospital’s chief financial officer vanished
following a scathing report.”
The company did not respond to several phone calls seeking comment.
When Quorum settled the massive federal case it denied wrongdoing,
but claimed it agreed to the penalty to put the matter to rest and move
on.
Donnette Dunbar, a spokeswoman for Brooklyn Health, said Schexnydre
selected Quorum because of his belief in their expertise as a top health
provider. She was unaware of Quorum’s past troubles with the feds, and
declined comment.
LICH had 500 beds — only 200 were filled — before the State
University of New York shut the site last February after years of
turmoil and financial troubles, bleeding about $13 million a month,
state officials said.
SUNY voted unanimously to close the
hospital in February 2013. The decision met with a massive outcry and
protest that included then mayoral candidate Bill de Blasio being
arrested outside the facility last July.
In February, the state decided to accept bids to take over the struggling hospital with no application fees or monies required upfront.
SUNY did not respond to a request for comment.
Brooklyn Partners edged out Peebles Corporation and Witcoff Group,
which had agreed to pay $260 million and planned to operate an emergency
room and urgent care center.
With hundreds of jobs at stake, officials said, the offer to keep the
site as a full-time hospital obviously helped the Brooklyn Partners
bid, even though filling the beds has been a key problem.
SUNY expects to complete the transaction with Brooklyn Health by May 22.
In the meantime, Brooklyn Partners is looking for financial backers.
The firm has until the first week of May to post 10 percent of its bid
or lose its top spot for the facility.
Led by Schexnydre, who is a California real estate developer and
former clinical lab supervisor, Brooklyn Health’s proposal calls for a
150-bed temporary hospital with an emergency room, ambulatory care,
intensive care, and other medical facilities to open while hospital
construction is underway.
The consortium also promises to create 1,000 apartments, some below
market rate, commercial space and medical offices on the campus.
If a new operator isn’t selected, SUNY will likely give up control of the hospital in May 2014 and LICH will close.