It is no secret that times are due to change. Just short of six months ago, President Donald Trump was vehemently calling for the elimination of the Deferred Action for Childhood Arrivals (DACA) executive order, an immigration policy signed into law by President Obama. Months later, after weeks of negotiation with Democrats in the House and Senate, immigration sentiment has shifted as news of the continuation of the DACA program delivered a surprise to the American people. Similar to immigration policy, and nearly every other matter of American law, the tax code is also continuously subject to amendment. As of December, a new bill that will provide significant tax cuts for millions of people has changed, and arguably benefitted the financial lives of most Americans. However, while the new tax law will inherently lower the individual income tax as well as payroll, estate, and gift taxes, one thing that stays constant throughout fiscal policy changes is the importance of estate planning or the preparation of the transfer of wealth to loved ones upon death. Though families will now be able to pass on more tax-free money to their children, going through with the proper estate planning process should still be a priority, especially since they will probably be dealing with larger amounts of money in assets. 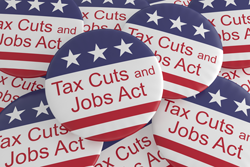 What Will Change As a Result of the New Tax Plan?

The Tax Cut and Jobs Act of 2017, arguably the Trump administration’s first notable legislation, made headlines regarding the massive tax cuts that the bill was implementing for corporations and small businesses as well as people of all tax brackets. With regard to estate planning, the new law increases various exemptions on individuals’ estates in an attempt to relieve the financial burden on those who choose to pass on significant amounts of money to their heirs. Starting in fiscal year 2018, the new tax law will increase the federal estate, gift, and generation-skipping transfer (GST) tax exemptions to $11,200,000 for individuals and $22,400,00 for married couples from $5,490,000 and $10,980,00, respectively, in the previous year. On January 1, 2026, roughly eight years after the law went into effect, tax rates and exemptions are set to revert back to their 2017 levels, adjusted for inflation.

Will This Affect My Estate?

One of the largest criticisms of the new tax code has to do with the law’s outreach and the way its benefits are “distributed” among the population. Although the new law will significantly decrease the financial burden of estate taxes on individuals, the number of the individuals who are able to take advantage of such exemptions is minuscule relative to the population. For example, in 2016, there were only approximately 12,000 federal estate tax returns of which only 4,000 were for estates holding at least $10 million, meaning that even fewer people will be subject to estate taxes once the new law goes into effect. In fact, the Joint Committee on Taxation estimates that a mere 1,800 estates will be subject to estate taxes in 2018.

While most people will likely not be able to take advantage of the increased estate tax exemptions, one aspect of the new tax law does indeed serve to the benefit of the middle class. As of 2018, the amount that each person may gift to as many individuals as he desires will increase to $15,000, from $14,000 in 2017. Furthermore, the provision will allow married couples to gift up to $30,000 to an unlimited number of beneficiaries without incurring a gift tax, effectively decreasing the size of their estate without paying any amount in taxes. In allowing individuals to do so, the provision lowers the taxable amount of their estate that the executor will eventually have the responsibility of paying. In addition, if you would like to make annual exclusion gifts to a minor without incurring a gift-tax, your best bet would be to see an attorney who can help you transfer the assets to a Crummey Trust, which is generally opened to store assets for minors, or a tax-advantaged college savings account.

Aside from an increase in the gift tax exemption, the new tax reform also benefits families with children who require continuous medical attention. The new legislation allows for an unlimited gift-tax exclusion for amounts paid on behalf of an individual directly to medical care providers for their services. The same gift-tax exemption applies to educational institutions as long as the funds are paid directly to the institution.

The New Tax Plan May Change the Size of Your Estate, Not the Process

Amid the national discussion regarding the new tax legislation, one thing that stays as important as it was is the need for individuals to engage in proper estate planning, especially if you own significant assets that you wish to pass on to your heirs. Being that the new law will increase tax exemptions for not only wealthy individuals with the increased estate tax exemption but also tens of millions of people in the middle class who will be able to transfer more tax-free money to their loved ones, consulting with a licensed estate planning attorney to plan your estate will not only save you plenty of headaches in the future, but will likely put more money in the pockets of your heirs.