Generally speaking, a person is considered incapacitated when he or she is no longer able or competent enough to manage his own personal affairs and maintain his or her own physical well-being. Though incapacitation can be the result of a number of mental illnesses, the bottom line comes down to whether or not the individual is competent enough to make and voice their own decisions. While severe mental illnesses such as dementia or alzheimer’s can determine a person’s competence relatively quickly, other disabilities like deafness, muteness, and blindness can sometimes blur the line when deciding whether an individual should be considered “incapacitated” by a court. 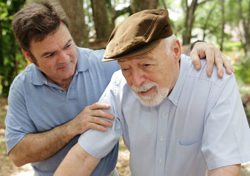 Can Blindness, Deafness, or Muteness Render Someone Incapacitated?

Though clearly a major obstacle for anyone who has to bear with it, deafness cannot solely be a determining factor for labeling someone as incapacitated. As mentioned, the term is only used when a court has decided that a person is incapable of making and communicating rational decisions regarding their well being, and while a hearing disability may make it much more difficult and costly to communicate their decision, deafness has not been shown to affect competence, and more notably, is a relatively negligent barrier to communication. A similar reasoning is applied to physical disabilities such as muteness and blindness. Since both impairments only hinder the individual’s ability to either verbally communicate or rely on eyesight to comprehend the terms of a contract or legal agreement, they do not limit or negatively influence their competence, and therefore, cannot be the sole justification for their being deemed “incapacitated.” In addition, since these impairments usually don’t affect people’s mental aptitude, with assistance, they generally retain the ability to make decisions for themselves.

What If A Person Is Blind and Deaf? Are They Rendered Incapacitated?

To be brief, the answer is no. Although suffering from a combination of the impairments noted above may significantly raise the cost and difficulty with which a contract is communicated to the individual, they are still merely obstacles to communication rather than mental capacity. As long as individuals with these disabilities are deemed mentally competent, they are legally permitted to make decisions regarding their own welfare.

How Can These Individuals Be Accommodated in a Legal Setting?

Being that the infirmities mentioned above don’t commonly interfere with an individual’s mental capacity, there are a number of ways these people can be accommodated in a legal setting so that the terms of an agreement can be properly and accurately understood by both parties.

Though note writing can be an effective means of communication for brief interactions, a qualified American Sign Language (ASL) interpreter is necessary for complex legal matters where all the intricacies of a legal agreement should be thoroughly spelled out and made clear. One strategy that is being utilized nationwide is the implementation of automated Video Relay Interpreters (VRIs), which provide a professional sign language interpreter through a video connection. Furthermore, should a VRI prove not effective, a client has the right to request a live ASL interpreter to ensure a meaningful and detailed interaction.

Similarly, accomodations can be made for blind individuals so that they can attain a clear understanding of a legal agreement without seeing the physical contract. If the principle has a visual disability but otherwise has complete use of his limbs, the document should be clearly articulated to him word for word. In turn, his understanding of the contract should be orally or legibly confirmed by a witness. Following, a ruler or other cut-out template should be used to guide his hand to a designated space on the document for a signature. It is recommended that the process of orating the agreement as well as having the principal sign the document be videotaped for their protection. The same process can be used to accommodate mute individuals, save the oration and use of a template.

Accommodations can also be made for individuals who suffer from a variety of these disabilities. For deaf-blind individuals, a Tactile Sign Language Professional (TSL) can be hired to communicate the terms of an agreement to the principle. In the process, the individual places their hands over the TSL’s hands and feels the shape, movement, and location of his hand signs to read the contents of the document. Once again, assuming the principle has complete use of his limbs, hiring an ASL interpreter (through a VRI) would be necessary to communicate the agreement to a deaf-mute individual. For blind-mute individuals, the contract should be printed in braille or orated in its entirety, and a physical cutout should be available to lead the person’s hand toward the document for a signature once their understanding of the agreement is established. For those who are deaf and mute, an ASL interpreter, preferably through a VRI, would be the most effective option.

What Happens If You Become Incapacitated? Can You Be Accommodated?

While the disabilities above cannot be the sole justification for classifying an individual as incapacitated, if a combination of the three, coupled with a clear detriment to their ability to make rational decisions leads to a court order declaring them as such, the law provides ways for their well being to be managed by interested and mentally competent third parties. In the case of incapacitation, a conservator is appointed by the court to manage the principal’s personal affairs, including making sure that their daily needs such as food, housing, medical and personal care, are met. The conservator and conservatee (incapacitated person), in legal terms, have only a fiduciary relationship; the conservator must act in good faith and only in the best interest of the conservatee.

In short, since incapacitation is determined by mental capacity rather than physical ability, impairments such as deafness, blindness, muteness, or even something as common as a language barrier are typically not enough to justify identifying a person as incapacitated, especially since numerous methods exist to accommodate these individuals in a legal setting. However, in the case that a court does find an individual to be incapable of making responsible decisions regarding their own well being, legal accommodations including establishing a conservatorship allow incapacitated individuals to be financially cared for and made decisions on the behalf of by a healthy-minded individual appointed by a court. If you or a loved one have an elderly family member who is at risk of becoming incapacitated, it is highly recommended that you consult with a licensed NY elder law attorney to preemptively ensure that responsible decisions are made on their behalf.