There is little doubt to the notion that the Medicaid program helps millions of Americans in need of affordable and quality health care. As one of the nation’s most well-funded federal programs, Medicaid allows more than 70 million Americans to receive necessary health care and prescription drugs at highly discounted rates or, quite often, no charge at all. As a matter of fact, federal law requires that Medicaid co-payments and other “cost-sharing” charges to recipients at lower income levels be nominal, and as one of the regulations from the Affordable Care Act mandates, states can charge Medicaid recipients no more than $4 for certain classes of drugs. However, as the expansion of Medicaid has opened millions of new recipients to low-cost prescription drugs that would otherwise have been inaccessible, the program has also attracted many fraudsters who take advantage of the massive discounts, and further the tragedy that is the opioid crisis. 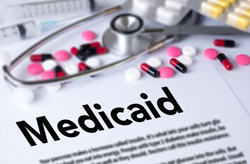 In investigating the issue, the Senate Committee on Homeland Security and Governmental Affairs has laid down some findings with regard to the ongoing opioid epidemic. According to a Majority Staff Report, the committee has found that since 2010, over 1000 people have been convicted or charged for using Medicaid to obtain cheap prescription opioids, and later reselling them for their “street value,” a dollar amount in the thousands. Furthermore, as the report notes, reselling the drugs is only the initial tier of the plight, while schemes involving Medicaid reimbursement occupied a rather significant chunk of the problem.

Is the Opioid Crisis Linked to Medicaid?

Perhaps the link between Medicaid fraud and the increasing severity of the opioid crisis can best be drawn when taking into account the states in which Medicaid budgets have expanded, and the opioid-related consequences that have pursued. In its effort to analyze the epidemic, the Department of Health and Human Services (HHS) collected data regarding the number of opioid-related hospital stays funded by Medicaid in the years after Medicaid was expanded in 2014. As the HHS reports, the number of these inpatient hospital stays spiked nearly 37 percent in the fourth quarter of 2014 compared to fourth quarter of the previous year, while the same statistic bears only a 6 percent increase in hospital stays funded by private insurance providers. In addition, the report also shows a correlation between jurisdictions that expanded Medicaid, which include New York, Washington, D.C., Rhode Island, Maryland, and Illinois among others, and the exceeding of opioid-related hospital stays well beyond the national average of about 224 out of 100,000.

Possibly the most telling regarding this issue, however, is a study comparing the number of fatal overdoses in states that expanded Medicaid coverage with states that kept it as-is post-Obamacare. Research from one HHS study suggests that as opposed to non-expansion states, states that expanded the program have been hit the hardest; data shows that deaths from drug overdoses rose nearly twice as fast per one million people, in expansion states, between 2013 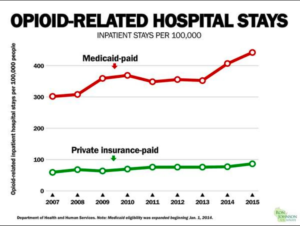 and 2015. In fact, HHS statistics list West Virginia, New Hampshire, Kentucky, Rhode Island, and Ohio, all expansion states, as having the highest rate of death from drug overdose. 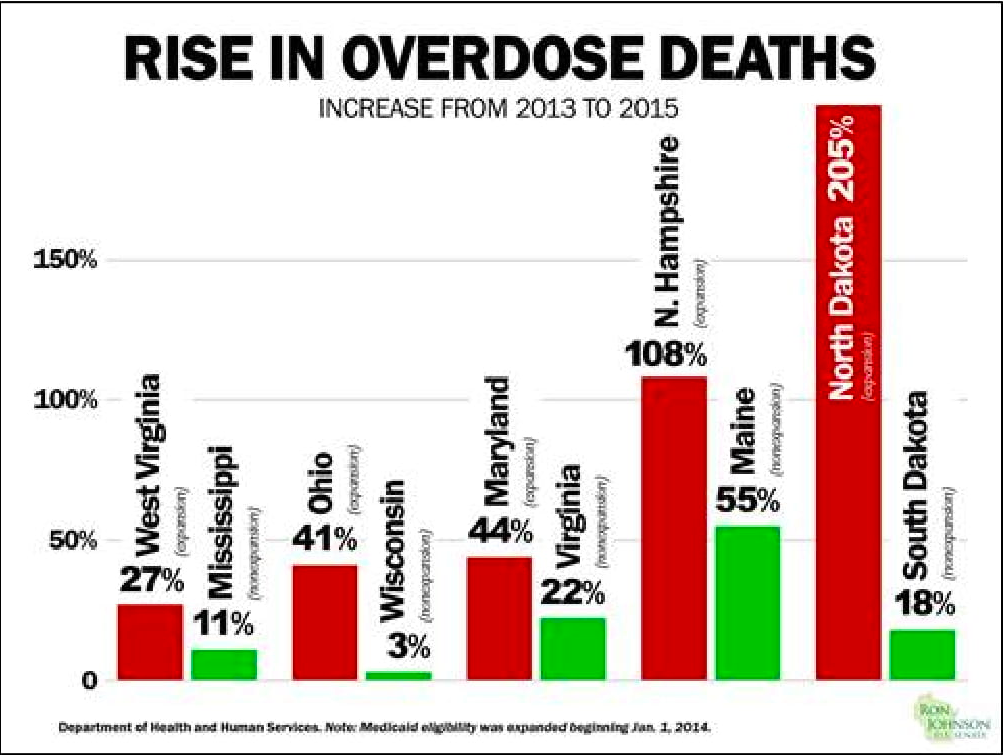 Considered one of the most “forward-thinking” states in the country, Vermont has long been a state with a minimal rate of uninsured residents. That being the case, shortly after the state accepted federal Medicaid expansion funding towards the end of 2013, in his State of the State address in 2014, Vermont Governor Peter Shumlin announced that the state was in the “midst of an opioid addiction epidemic”. While the figures cannot be said to portray a causational relationship, especially because heroin is illegal and sold on the black market, it’s important to note a statistic by the Vermont Department of Health (DOH) that outlines a 40 percent increase in heroin dependency among Vermont’s residents within a year of the state accepting increased federal funding for Medicaid Additionally, the DOH reported that nearly 80 percent of the state’s inmates are either addicted to opioids or in prison because of their addiction.

While data does show that Medicaid-expansion states have suffered a strikingly higher rate of opioid-related deaths and hospital stays, Medicaid fraud, as mentioned, is the issue at hand. As Medicaid coverage increases, more people have access to highly discounted drugs that can, in-turn, be sold for enormous profits, and since these crimes are statistically underreported, opioids continue to raid the streets of America as acquiring these drugs is increasingly incentivized.

The following cases highlight some of the main problems that arise with the expansion of Medicaid across the country.

A case involving “backdoor operations” in a neighborhood deli shows just how far the extent is to which some go to profit off of defrauding the Medicaid program. In 2015, the Federal Bureau of Investigation (FBI) discovered a massively profitable drug rink, trafficking oxycodone, HIV medication, and other drugs, conducted in none other than a local family-owned grocery store. An interaction between an FBI confidential source and a participant in the scheme revealed that the drug deals occurred in “a small room behind the door at the back of the store,” where Medicaid beneficiaries would exchange bottles of prescription opioids with the defendants for cash. After obtaining massive quantities of highly demanded illegal drugs, the defendant, Carlos Paniagua, along with relatives, would resell the drugs for their street value, an immensely enlarged dollar figure.

This particular scheme demonstrates exactly the financial incentives that can lead to the individuals looking to exploit the Medicaid program. A conversation between an FBI source and a participant in the scheme revealed that a single bottle of 190 prescription percocets, that would typically cost the Medicaid beneficiary close to nothing, would be resold at $4 a pill, for a street value of $760, and rake in hundreds of dollars of profit for the perpetrators.

In the criminal area of Medicaid fraud, doctors and pharmacists often make up a hefty portion of the perpetrators. Licensed pharmacist David Russo established a reputation with his customers for his willingness to fill massive amounts prescriptions for oxycodone and methadone that he knew were written outside the realm of legitimate medical practice, and which would be reimbursed by Medicaid. Most of the prescriptions were written by “Dr. T” and “Dr. Z,” whose offices were not remotely close to Russo’s Rx, the pharmacy where Russo fulfilled the prescriptions. After interviewing other pharmacies located near Russo’s Rx, the Drug Enforcement Administration (DEA) had reason to believe that Russo’s patients engaged in “pharmacy shopping,” since his pharmacy was the only operating location that would fulfill such massive prescriptions of opioids. The volume of prescription drugs that Russo distributed accumulated to over 700,000 dosage units of oxycodone, and 117,000 dosage units for methadone, making him one of the largest dispensers of opioids in the entire State of Maryland.

Aside from receiving reimbursement from Medicaid, Russo was also discovered to have received cash from several patients, and apparently enough to warrant having a cash counting machine at his pharmacy. Between June of 2009 and 2010, Russo was found to have collected at least 55 cash deposits totaling $862,000.

As mentioned, Medicaid doesn’t seem to be the inherent problem, merely the tool through which fraudsters are able to collect their ill-gotten gains. Every day, millions of people in need of affordable healthcare are able to receive necessary medical care and prescription drugs at low costs. The underlying problem consists of individuals who seek profits for themselves, at the cost of massive losses for hardworking taxpayers who fund the Medicaid program. As Medicaid expands, an increasing number of malicious individuals are able to acquire opioids among other prescription medication for ridiculously discounted rates, and enjoy the profits, whether acquired through resale or reimbursement, while contributing to the ongoing opioid crisis and driving more people into life-threatening addiction. Considering the rate at which the opioid crisis is spreading throughout the country, legislators must consider how to balance the benefits the program currently generates with the maligned incentives which lead to costs those who exploit it incur on American society.