On rare occasions, wills are challenged in court if the will does not follow necessary guidelines. In some cases, the will may not fulfill legal requirements such as a necessity for two present witnesses. In other cases, an individual may be able to prove that the will–maker, also known as a testator, was not in a capable state of mind at the time of will execution and signature. It is difficult to challenge a will after the writer passes away, especially if it was properly written and witnesses were present, however it is not impossible. If you are aware of the possibilities and are able to identify one that applies to your situation, there might be potential for revocation. 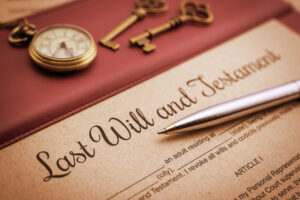 The legal term for the mental capacity needed to write and sign on a will is called “testamentary capacity.” To be classified as an individual of such capacity, the individual must fully understand or possess:

It is important to note that the requirements for “mental soundness” are rather flexible. Proving that the testator was mentally compromised when signing off on the will is a complex process. Forgetfulness or recognition inability does not in itself qualify as mental incapacity. Generally, the court requires that the individual who signed off on the will:

In a potential lawsuit, important and perhaps necessary testimonies may come from a doctor who saw the will executor around that time, witnesses that also signed the will, and the lawyer that was present at the time of signature.

A will may be proven invalid if someone can prove in court that it was written under “undue influence.” In this instance, at the time of signing, the testator (often a vulnerable individual) was manipulated by someone they trust into transferring most of their property to the overpowering individual. Such individuals are unfortunately, often someone close such as a caregiver or child over the age of 18. In this occurrence, the will is formulated to serve the manipulator’s wishes rather than the will maker’s.

Similarly to the previous possibilities, fraud or forgery cases seek to prove that the will–maker was forced or tricked into signing the final document. Such cases are often built on allegations of undue influence and lack of testamentary capacity as well.

For a will to be considered valid and properly executed, it has to be dated and signed with at least two adult witnesses present. The adults must sign the will and cannot be individuals that have been named to inherit any property. Some states allow handwritten “holographic” wills in which the entire will is written in this testator’s handwriting, however New York is not one of them. New York only recognizes holographic wills written by members of the U.S. Armed Forces who are in the midst of a conflict. This will is only considered valid if it is written entirely in their handwriting; it cannot be typed or printed. Even these wills are considered invalid after one year. Therefore, they don’t offer much protection for the select few that have the right to write them. These forms of wills are often easily challenged in court because it must be proven that it was written entirely in the testator’s handwriting, a rather difficult process without any witnesses present.

If you feel that any of these possibilities apply to your situation, you may be entitled to a court probate hearing. However, if you are in the process of helping a loved one write their will, you are in a position to prevent such possibilities. Make sure your loved one is in a capable state of mind to write and understand the contents of a will. Discuss with your loved one and other family members who will aid in executing the will and be present on signing day as a witness. Most importantly, you should seek professional legal advice and execution.

The Law Office of Inna Fershteyn offers a comprehensive will package that includes an estate planning consultation, a healthcare proxy, power of attorney, and will drafting and execution with the presence of two witnesses and an attorney. For your will planning needs, call (718) 333- 2394.