Witnessing a will in New York means that if a will is ever contested, the witnesses have the ability to testify about the procedures that were completed during the execution of the will. Any bequest (the action of giving assets to individuals or organizations using the provisions of a will or an estate plan) to a beneficiary who witnessed a New York will is considered as void. However, with the presence of a sufficient number of witnesses, the will can be considered valid and the bequest will not be void. Therefore, a beneficiary can witness a will in New York depending on the bequest present and the number of sufficient witnesses. 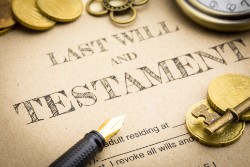 In order to create a proper execution of a New York will, there are specific regulations that are required of the witnesses. These regulations include having two attesting witnesses who must include their addresses and sign after the testator signs. It is imperative that the testator sign in the presence of these witnesses. When selecting a person to serve as a witness be sure to choose a person that does not benefit from the will either directly or indirectly. Keep in mind that if a witness is called to testify in a will contest after the death of the decedent, the Will witness must be able to attest that the testator was mentally competent at the time of the execution of the will. It is important to consider that when a beneficiary is used as a witness, it creates a conflict of interest situation and may potentially avoid the bequest. We recommend that an experienced New York estate planning attorney assist in preparing the will for you, as well as attend the signing ceremony to ensure that the will is properly signed and attested according to New York law. The attorney will explain all of the provisions of the will to by reviewing the New York probate process with you to ease any potential concerns.

It is also recommended that a person who is a beneficiary under the will should not act as a witness. If property is left to a witness or to their spouse they will not be eligible to receive that gift. This is true in most instances, unless the will has at least two other witnesses who are not beneficiaries, and who are not the spouse, if the gift is a repayment of a debt, or the other beneficiaries agree. If a beneficiary witnesses your will the will is still considered valid, however the beneficiary witnesses risk losing their inheritance. Anyone who you wish to inherit property under your will should not be a witness to the signing of the will. This serves to prevent witnesses from coercing the will-maker into leaving them assets, such as property. In the case that the beneficiary is called to court to testify on behalf of the state of mind of the will-maker, witnesses receiving assets, such as property could have the potential to fabricate statements, rather than providing facts. All in all, while it may be legally possible for a beneficiary to serve as a witness, it usually prolongs the probate process and makes it more complex for all parties involved.