Money makes the world go round, so when we get shorted on our paychecks, it can make us stop dead in our tracks. Of course, it’s hard to shut down the weary boss of a company short on cash, but rules are rules; at the end of the day, that money is legally and rightfully yours.

What Laws Protect Me?

The federal Fair Labor Standards Act (FLSA) is a blessing when it comes to employees’ rights. This 1938 law, also known as the “Wage and Hour Bill,” establishes many of the protections that employees enjoy today and oversees an amazing breadth of workplace regulations, including those regarding minimum wage, overtime, and the nonpayment of wages. Following a 2016 Federal District Court ruling, the FLSA was also extended to protect against the late payment of wages after the Court opined that this was “the equivalent of nonpayment for the purposes of the FLSA.” State laws also add on to these protections, but vary when it comes to an employee’s right to having a set payday. 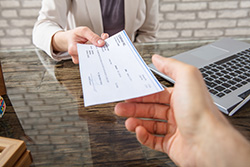 Where Do I Stand?

As a general rule of thumb, you must first understand what type of laborer you are to understand the type of pay-day protections you have; this holds true in all states. Often times, if you work in the public-sector, you will have more payday rights than someone working in the private-sector. Of course, working in either of these sectors still affords better protections than those offered to independent contractors, who are not usually covered by state laws governing paydays and are instead bound to the payment terms within their own contracts.

What Are Some Common Payday Rules?

All states, save for Alabama and South Carolina, require employers to pay their employees at weekly, biweekly, bimonthly, or monthly intervals. Most states also mandate that employers communicate all payday requirements to their employees. In addition, it should be noted that the FLSA spells out what payments qualify as “late,” holding that those delivered even just a day after their scheduled date will be considered as such.

What Should I Do if My Paycheck is Late?

The procedure on what to do when your employer is late with your paycheck, like most other things in this article, varies again from state to state. However, there is a near-universal framework that these procedures follow with which you should acquaint yourself.

First, you should write to your employer asking him for the wages that he owes to you. From there, it can go two ways: if your employer pays you the wages, the matter is over and you should forgive him – a one time mishap was probably the result of an honest mistake; however, if your employer refuses to hand over the money, or “forgets” frequently, you should consider either filing a suit privately in a small claims or superior court, or filing a claim with your state’s labor agency. If you do choose to sue, you should know that the Department of Labor and state governments have provisions allowing you to do so to recover back wages owed to you by your employer. The Secretary of Labor or your state government may also issue an injunction (a court order commanding or prohibiting an action) on your behalf, effectively restraining your employer from violating the FLSA.

What Else Should I Do?

If the payday violation by your employer is particularly egregious, or if the situation is particularly complex, seeking the advice of a licensed and experienced attorney is your best bet at recovering assets that are rightfully yours. Only he or she will be able to properly navigate you through the otherwise confusing waters of labor law. Additionally, in most cases, if you win your suit, state law dictates that your employer is required to cover your litigation costs, so there is no reason to not make sure you are fully equipped with a professional attorney when going after your earned wages.