Simply put, Medicaid fraud is far more common than you may think. In 2017 alone, according to the Department of Health and Human Services, Medicaid Fraud Control Unit (MFCU) convictions totaled 1,528 with the majority having to do with Personal Care Services (PCS) attendants and agencies. It’s important to know that both patients and medical professionals alike can be charged with fraud, and regardless of which side of the coin the defendant falls on, they can face serious consequences in the event they are convicted. 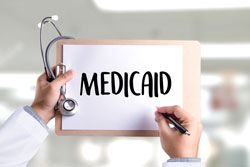 Although the exact penalties a defendant may face typically depend on the severity of the fraud and the means through which it was committed, there are a number of penalties that have been consistently associated with Medicaid fraud cases over the years. They are:

Jail Time
Depending on the exact charges and whether or not the crime resulted in bodily injury or death of a patient, it is very possible that a Medicaid fraud conviction can bring about a lengthy jail sentence. This kind of charge is usually anywhere from five years to life in prison.

Fines
A common thread among Medicaid fraud convictions is the potential requirement to pay a sizable fine. Although the amount fined depends highly on the specifics of the situation, it is not uncommon to see fines in the realm of or even exceeding tens of thousands of dollars.

Probation
Another penalty frequently attached to Medicaid fraud is being placed on probation. During this time, those convicted will have to abide by all probationary requirements, which usually include regularly attending probation meetings, strict employment standards, and many others.

Restitution
Restitution is perhaps one of the more straightforward penalties involved in Medicaid fraud cases. Generally speaking, if the fraud resulted in a loss of funds for an insurance agency or patient, the defendant may be ordered to reimburse the victim’s losses.

Treble Damages
This is one of the most significant penalties in Medicaid fraud cases. The damages owed are calculated by taking the amount of money fraudulently received from the government as reimbursement and multiplying it by three.

Civil Monetary Penalties
Civil Monetary Penalties are fines that are assessed on a per claim basis. In this kind of charge, each individual false claim would carry its own fine. For a court to approve this kind of charge, it must first impose a civil penalty and determine how may distinct violations occurred. The current minimum penalty per charge is $10,957 and the maximum is over $20,000.

Medicaid fraud is a serious conviction. As expected of the legal system, any account of fraud, especially that from the government should be met with significant penalties to discourage such behavior from ever taking place. In the American legal system, that is exactly the case. If you have become the subject of a Medicaid fraud investigation, it is imperative that you hire a Medicaid fraud attorney to represent your case immediately.