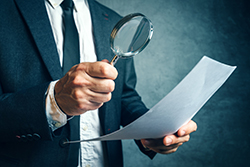 How Will I Know If I Am Accused of Medicaid Fraud?

First of all, how do people get accused of Medicaid fraud? The Human Resources Administration (HRA) uses computer analytics to match Medicaid recipients with databases containing information about their assets, employment, education, and finances. If they discover inconsistencies between the databases and the information you reported on your Medicaid application or recertification, they will suspect you of Medicaid fraud. At this point, they may conduct field investigations and reach out to your employers, past or present, without your knowledge in order to gather information and construct a case against you. Then, the HRA Bureau of Fraud Investigation (BFI) will send you a letter requesting you to come in for an interview with the investigators. The purpose of this interview, regardless of what investigators may tell you, is to prove that you are guilty of Medicaid fraud by getting you to hand over sensitive information, such as your tax records, to the investigators.

Fact or Fiction: Does Bringing An Attorney to the Interview Convey Guilt?

Medicaid Fraud Is A Serious Crime

If you show up to the interview by yourself and comply with the investigators’ requests, you can not depend on your lawyer to fix your mistakes later on. In the event that your case becomes a  criminal prosecution, it will become much harder to defend. If convicted of Medicaid fraud, you may face massive administrative and civil penalties such as fines, restitution, imprisonment, and a permanent criminal record. Needless to say, Medicaid fraud is not a matter to be taken lightly. That being said, it is also not a dead-end street, and with the supervision of a qualified Medicaid fraud attorney, you may be able to alleviate the financial and emotional burdens of the investigation.