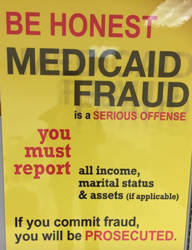 Reasons Why You Are Being Investigated

Medicaid Fraud investigations occur when the investigator suspects that you have failed to disclose important information. If you are targeted for Medicaid fraud you most likely had conflicting information on your Medicaid applications that are different when cross referenced with other information pertaining to you. After all, you cannot lie or hide documented information. If you do not qualify for Medicaid, but made false statements regarding your income, marital status, or living arrangements, you may receive a Medicaid fraud letter. You are expected to report all sources of income including those from work, rental income, gifts, and any dividends you may have received from a business or investment. Consequently, if you fail to update Medicaid with any changes in your income, assets, or other significant information regarding your financial situation, it will be considered as Medicaid fraud. You are required to report any changes immediately, before an investigator finds an inconsistency between your documented information.

Abusing Medicaid benefits is obviously a fraud. Examples of abuse include reselling prescriptions or products received, obtaining duplicate medications, and using more than one Medicaid card. Providers and hospitals can also be suspects for Medicaid fraud. Common abuses of Medicaid by providers and hospitals include false billing for nonexistent services or for services that were not deemed medically necessary, billing for the same service twice, and bribing patients to sign for services that weren’t carried out.

When you receive a letter from the HRA for Medicaid fraud asking that you come to an interview, your first step should be to contact a Medicaid fraud attorney as soon as possible. You have the right to bring your attorney with you to the meeting. It is important to speak with an attorney first because many people are not aware of their legal rights nor do they understand their situation. You are more likely to make a mistake by trying to clarify the situation for the investigator, and the investigator is likely to use your words as evidence against you. The investigator most likely has gathered information about you already, and may ask you to come to the interview in order to gather documents and statements that they can use to prosecute you. Moreover, do not go directly to a meeting with the investigators. Instead, receive professional help from experienced attorneys will allow you to handle your case with more knowledge of your rights.

In addition, investigators are most likely working with the Bureau of Fraud Investigation (BFI), who are also investigating you. They have the right to gather more information about you through specialized searches, documents, and speaking with your neighbors, friends, and family. They may also follow you and take photos of your assets, including your property. The investigation could take several weeks and months, allowing them to thoroughly investigate you. It is not wise to immediately meet with an investigator because you will feel pressured to speak, especially when you do not understand your situation or know how to speak to an investigator.

Depending on the severity of the fraud, various consequences exist for individuals who are convicted of Medicaid fraud. If you are prosecuted for Medicaid fraud, you may end up repaying Medicaid for the benefits that you are convicted of having defrauded through monetary fines, penalties, and restitution orders. Other than repayment, you may be penalized in other ways such as civil judgments and liens on real property that you own, garnishment of your wages, a prison sentence, suspension or loss of professional licenses, or deportation. In addition, you will most likely be disqualified or excluded from further receiving Medicaid benefits. It is possible to negotiate a financial settlement with an investigator, but you will need the help of an experienced Medicaid fraud attorney who can help you avoid prosecution and reduce the amount you owe.

If you receive a Medicaid fraud letter, contact a licensed Medicaid fraud attorney immediately. Don’t worsen your situation by speaking to the investigator alone. Your attorney will help you negotiate with the investigator and settle the case so that it does not become a court case. If you have any further questions concerning Medicaid fraud, please don’t hesitate, contact the Law Office of Inna Fershteyn at 718 – 333 – 2394 to schedule a consultation.