What is the Stretch IRA?

The term Stretch IRA refers to the ability of IRA beneficiaries to stretch distributions that have been inherited from the IRA over a lifetime. This is a definite advantage to the beneficiary, as it allows the account to continuously grow despite withdrawals. A 30 year old beneficiary can stretch distributions over 53.3 years, which begins with the withdrawal of 1.8 of the total account prior to Dec. 31st of the prior year. The required minimum distribution (RMD) will continue to slightly increase until the end of the 53.3 years when the balance must be withdrawn. Based on Stretch IRA policies, the beneficiary can take more than the required minimum distribution. By using the stretch strategy, the IRA could be passed on from generation to generation, taking advantage of tax-deferred and/or tax-free growth of the assets within it. 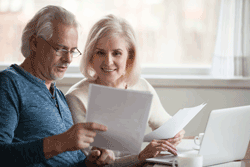 How Do I Qualify as a Beneficiary for the Stretch IRA?

To qualify for the Stretch IRA, the beneficiary must be named on the IRA or plan beneficiary form. The beneficiary must be a person and not an estate, charity or any kind of trust. This is because the nonperson beneficiaries have no life expectancy, thus they cannot use the stretch provision. Stretching out an IRA gives the funds in the account more time—potentially decades—to compound tax-deferred. A very young beneficiary could stretch out distributions for decades. Under the previous rules, non-spousal beneficiaries had to start withdrawing funds from the IRA too—even those who inherited Roth IRAs, which don't carry RMDs for the original account holder. They could base the RMDs on their own life expectancy; the younger the beneficiary, the lower the annual RMD.

What is the Secure Act and How did it Replace the Stretch IRA?

The Secure Act became law on Dec. 20, 2019 with the intent to make it easier for small business owners to set up “safe harbor” retirement plans that are less expensive and easier to administer. The Act pushes back the age at which retirement plan participants need to take required minimum distributions (RMDs), from 701⁄2 to 72, and allows traditional IRA owners to keep making contributions indefinitely. The Act mandates that most non-spouses inheriting IRAs take distributions that end up emptying the account in 10 years, while allowing 401(k) plans to offer annuities. The Secure Act replaced the Stretch IRA by initiating new laws in regards to tax-advantaged retirement accounts.

What are the New Changes from the Old Stretch IRA?

The parts of the Secure Act that will most immediately impact people are its new guidelines around inherited IRAs. For Example: You inherited a retirement plan like an IRA or a 401(k) as a non-spouse beneficiary. Under the old rules of the Stretch IRA you were able to withdraw from that retirement account over the rest of your life, but under the Secure Act, you’ll have to take that money out within 10 years. Unlike RMDs, though, the new 10-Year Rule offers flexibility around the timing of distributions. Since it does not require annual withdrawals, funds can be withdrawn in any amount, at any time over the course of the 10-year term as long as the full balance is withdrawn by the end of the 10th year.

What are the New Qualifications for Eligible Designated Beneficiaries of the Secure Act?

How can Withdrawals Now be Made?

The Secure Act lets account holders make penalty-free withdrawals of up to $5,000 following the birth or adoption of a child, without penalties. Account holders who repay the funds won't owe income tax on the withdrawal. Withdrawals from tax-favored retirement plans prior to age 59-1/2 are generally subject to a 10% early distribution tax (in addition to regular income tax) under Section 72(t) of the Internal Revenue Code, unless one of several exceptions applies.The SECURE Act adds a new exception for a “qualified birth or adoption distribution” (QBOAD). Employees can take a QBOAD during the one-year period after the date of a child’s birth or adoption. For QBOADs, an “eligible adoptee” is anyone (other than a spouse’s child) younger than age 18 or incapable — physically or mentally — of self-support. QBOADs are limited to $5,000 per individual for each birth or adoption. The limit applies to all plans in which the employee participates, including other plans within the employer’s controlled group, other employers’ plans in which the employee has an account balance and any IRA held by the employee. The $5,000 limit applies to an individual, not a family, so the employee’s spouse may separately receive up to $5,000 as a QBOAD, even if both spouses work in the same controlled group. QBOADs aren’t subject to the 20% mandatory withholding that applies to eligible rollover distributions (and the special tax “402(f)” notice isn’t required). Instead, QBOADs are subject to the usual tax withholding rules for lump sum payments that aren’t eligible rollover distributions (mandatory 10% withholding), unless the employee elects no withholding.

What Steps can be taken to Minimize Tax Liability for Heirs?

To minimize the tax impact on your beneficiaries you may convert some of your traditional IRA to Roth IRA. Unlike regular IRAs, which are funded by pretax income, Roth IRAs are made solely with post-tax money. Doing so in small quantities over a period of time will prevent your income from rising into a higher bracket, thus minimizing tax liability. Beneficiaries will still have to follow the 10 year rule (requires that the entire balance of the asset be distributed within ten years of the death of the participant), but there will be no tax on the amounts they withdraw. Another method to minimize tax liability for heirs is to take advantage of qualified charitable distributions (QCD), as this allows you to make charitable contributions through direct transfers from your IRA. Those IRA withdrawals are excluded from your income, therefore minimizing the tax impact for both you and your beneficiaries. QCDs satisfy your annual RMDs, thus allowing you to donate to charities while saving on taxes. QCDs can be used only by IRA owners or beneficiaries who are age 70-1/2 or older. Even though the age for RMDs was changed to age 72, the age for QCDs remains at 70-1/2. Other methods to reduce tax liability for heirs include taking advantage of a year when you have low taxable income by converting most of the assets in that year, when your effective tax rate is lower than usual. For Example: If you own a small business, a year of low profits is a good year to convert to minimize liability. Additionally, converting in a year when extremely high-deductible health-care expenses reduce your taxable income significantly will be effective in minimizing tax liability for heirs.