Can a person have more than one conservator? 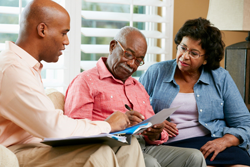 Do you have an elderly relative that is having trouble taking care of himself? Has he neglected naming a power of attorney to handle his finances and medical decisions? In situations such as this, families may see gaining conservatorship as a viable means to solve this problem. However, even then other problems may arise. For example, what if there are disagreements over who should be conservator, what if more than one person is willing to take on this responsibility. In situations such as this, co-conservatorship may be a viable option.

Conservatorship is a legal tool used to carry out the financial and medical responsibilities of a person (also known as a ward) who has been proven to be incapable of performing such tasks on their own due to old age or disability. If a court rules a person incompetent, the responsibility of managing their finances, living arrangements and making healthcare decisions will be transferred to the new conservator.

What are other considerations I should be mindful of when considering co-conservatorship?

It’s essential for co-conservators to have a good working relationship and to be like-minded. If two conservators are the type to be argumentative, it will be very hard for them to arrive at mutually agreeable decisions, thus thwarting the process of managing a ward’s affairs. Some potentially contentious include forms of treatment a ward receives, how assets should be spent or invested, choosing a place of residence for a ward, and end-of-life decisions. Furthermore, it’s important to keep in mind that each conservator is individually responsible for every decision made on the ward’s behalf. So even if you did not agree with a decision made by the other conservator, you would still be held accountable. Thus, people may mistake having several conservators as being more efficient, since there will be more hands available to manage a person’s affairs, however down the line, more than one head involved in a single decision can bring about a lot of issues which otherwise would not be a problem.

Are there any alternatives similar to co-conservatorship?

Instead of appointing a conservator or co-conservators to manage all of an incapacitated person’s affairs, a judge might appoint both a conservator and a guardian. In this case, a conservator would be responsible for specifically managing a person’s financial affairs, whereas a guardian would be responsible for managing other life choices such as where you live and where you eat. Nonetheless, as these responsibilities can coincidence, especially when trying to determine how much money should be allotted to certain areas, it would still be important for guardians and conservators to work together.