The Presidential election of 2020, an event that we have all been greatly looking forward to, is not only a race between Democratic and Republican candidates, rather it is a turning page in healthcare. The current president Donald Trump and the Republican led White House has brought forth privatization of the healthcare industry in the action of eliminating the Affordable Care Act. It has been made clear that the Patient Protection as well as Affordable Care Act (ACA) will be repealed on behalf of the government, which began in 2015 during the initial attempt of the GOP in repealing certain sections of the act. The bill to repeal the act passed through the Senate and House of Representatives, but was turned over by President Obama. The ACA ensured that individuals with preexisting conditions received healthcare coverage and reduced monthly required payments, as well as out-of-pocket costs for lower income members of society. In the decision not to repeal the ACA, the fear of losing Medicare for elderly citizens was greatly reduced, as the Affordable Care Act stands strong for the time being. The administration is currently focused on Part D of Medicare, which pertains to the coverage gap concerning how much of the price is actually covered by the health insurance. Elderly individuals were being charged full price for prescription drugs, which is extremely difficult to cover the costs out of pocket given that they are retired or on the path to retirement. 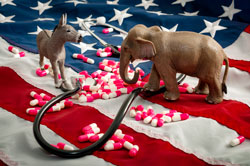 Depending on which party holds the majority in either the House or Senate will define the manner in which Medicare will be directly impacted. If the Democrats retain the majority, then individuals can expect to see a push for greater access to Medicare for All and a strong effort to lower the prices of drugs. On the contrary, if the Republicans obtain the majority, then individuals may see a reduction in social safety net programs along with many efforts to reform current Medicare policies. Upon President Trump’s initial election in 2016, he promised to make beneficial changes in regards to positively reforming Medicare and Social Security programs. He signed the bipartisan two year budget agreement, which served to increase funding for numerous aging programs by delegating $140 million for the Older Americans Act. Presidential candidate Biden hopes to lower the Medicare eligibility age to 60, as more and more Americans are in need of additional aid due to their health conditions and overall well-being. Current President Trump and candidate for the position of the 2020 elections has stated that he is making a great effort to expand access to affordable healthcare, as evident by his Tax Cuts and Jobs Act plan where he repealed the mandate that forced people to purchase expensive insurance and taxed the people that were unable to afford this purchase.

In regards to the current democratic candidate running for the 2020 election, Joe Biden has numerous proposed changes for the Social Security program. Some of these changes include, but are not limited to changing the payroll tax cap for revenue increases, increasing survivor benefits, as well as increasing minimum benefits, and using a higher price index for COLA. Biden’s plan to increase social security benefits would coke at the cost of increased tax payment. The current 2020 unfunded Social Security obligations are $16.8 trillion. If additional revenue is failed to be raised or expenditures lowered, then Social Security money will run out by 2035. Biden commonly prefers utilizing a bipartisan solution, as he wishes to increase the tax cap to minimize the loophole of the extremely wealthy paying less in taxes than the poor members of the socio-economic classes. He plans to raise the full retirement age, which means that people would be able to qualify for their full monthly payout. In increasing taxes to raise additional revenue, the fear of Social Security money running out for the elerly population is greatly reduced. President Trump seeks to make permanent cuts to the payroll tax, which is wonderful in the present, yet horrible for future elderly individuals. These payroll taxes fund Social Security and Medicare for much of the elderly population today, so eliminating them would put that entire population at risk. Seeming as most of the American population is behind on their retirement savings the best way to maximize your benefits would be to contact an esteemed Elder Care attorney for advice and guidance regardless of which candidate and political party wins the 2020 Presidential election.

Presidential elections are always a stressful time for most Americans, especially this year in the face of the Covid-19 pandemic. It is often difficult to choose a side and to understand all that the candidates are proposing on behalf of their plans if they are to win the election. It is extremely difficult for the elderly population who have Social Security and Medicare benefits at stake, as they have retired and are now in need of proper care and aid. Regardless of which candidate wins the presidential election, either Biden or Trump, it is still imperative to take action in regards to Elder Care planning. Now is the perfect time to reach out for advice in regards to beginning the planning procedure or even finalizing it, as with each election comes new regulations and changes to old policies. An esteemed Elder Care attorney with much experience in the field of Medicare and Social Security will be able to effectively guide you through the process, as well as make any changes necessary according to potential new regulations. For Medicaid eligibility information and Social Security concerns please contact the Law Office of Inna Fershteyn at 718-333-2394 to best prepare for changes that arise in the face of the 2020 Presidential election.